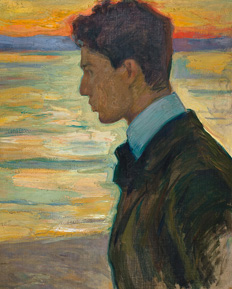 BORIS BESIDE THE BALTIC AT MEREKULE, 1910.
Portrait by his father, Leonid Pasternak, oil on canvas

Boris Pasternak was a great Russian poet, the author of the novel Doctor Zhivago, and the winner of the Nobel Prize for Literature in 1958.

The son of the artist Leonid Pasternak and his wife Rosalia, a gifted pianist, Boris was brought up in an environment rich in art and music. Among the family’s frequent guests were Tolstoy, Rachmaninov - and Scriabin, who was a formative influence on Boris’s early ambition to become a composer. In 1912 Boris turned to philosophy, which he studied in Marburg, but he had already begun writing poetry.

Boris Pasternak’s poetry is remarkable for its musicality, and its highly original, vividly impressionistic, associative imagery. The collection My Sister Life (1922) established him as a leading poet of his generation. It was followed by further volumes of poetry: Themes and Variations (1923), the novel in verse Spektorsky (1926), Lieutenant Schmidt and The Year 1905 (both 1927), and Second Birth (1932).
At the same time he was writing prose: The Childhood of Luvers (1924), Aerial Ways (1925), and his first brief autobiography, Safe Conduct (1931). The pressures of Stalin’s regime turned him to translation, including Shakespeare, Ben Jonson, Goethe, Schiller, Kleist, and the poems of his Georgian contemporaries and friends. In 1943 he published On Early Trains, a collection of poems written from 1936 onwards and later extended into Earth’s Expanse (1945).

Boris Pasternak worked on the novel that became Doctor Zhivago for many years. It first appeared in an Italian translation in 1957. It combines epic sweep with a lyrical descriptive style and an uncompromisingly honest portrayal of Russia before and during the Revolution. The Nobel Prize gave the novel world-wide publicity, which was fuelled by the opprobrium it brought down on Pasternak in the USSR. His second autobiographical fragment, An Essay in Autobiography, was published outside the Soviet Union in 1959. He died in Peredelkino, the writers’ village outside Moscow, in 1960.

All rights reserved © The Pasternak Trust 2019.